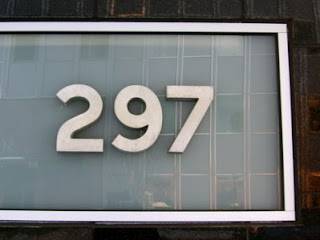 Image courtesy of Ampersand Seven
I have returned!

After a few months of going up, down, up, down, up, up, up, I've finally kicked my own ass and put it into high-gear. No more screwing around. No more denying how many carbs are in things. No more laziness. No more whatever it is I've been doing wrong for the past several months.

I kept getting back up to 307, and then I'd manage to get down to 302, hang out there for a couple weeks, and then right back up. Ugh.

I finally kicked that cycle, got myself back down to 302, then 301, then 300, and then whoosh - here I am at 297 this morning, right back where I was before our trip to San Francisco, right where I should be.

Now that I'm focused, disciplined, worshipping my Fitbit, working out more, and keeping my carbs to a very strict 40-80 every day, I plan to see that number go down instead of back up over 300 again. It is way too easy for me to gain a couple of pounds just from one bowl of cereal, so I really, really need to stay focused on low-carb, low/zero-sugar eating. I'm not messing around anymore. I don't want to be pre-diabetic. Having insulin resistance is irritating and a pain in the ass as it is. I hate giving up my yummy protein cereal, but I've developed a new love for the breakfast sandwiches I've been making in the morning. It's a low-carb flatbread with egg white, ham, spinach, and cheese. Yummmmmy! And it fills me up for 2-3 hours, right about the time I have my morning snack. :)

Anyway, the lowest I've been (and it was for, like, two days) is 296, so I'm not going to full-on celebrate until I drop two more pounds, but STILL. I'm very optimistic. I lost four pounds during the past 7-8 days, and that's very good a sign that I'm doing exactly what I need to. Yay, me.

I've neglected this blog for a long time because I was so depressed about the up/down, not to mention very busy with school and trips and my promotion at work and so on. I'll get some new pictures up and maybe summarize some of our recent trips at some point. I also have some recipes to post. :)

I am so far behind on updating this thing that I keep putting it off. Sorry!

My weight hasn't budged in several weeks, so I bought a Fitbit to help out. I love this thing! It motivates me to move more, and I find myself going up and down our stairs while waiting for the microwave, parking farther away, etc. Psychology = awesome. ;)

It syncs with MyFitnessPal so I know how much I can eat. It turns out I was eating WAY too much, which would account for why I haven't seen any scale movement since April. I was eating pretty close to maintenance. Whoops!

I've been eating a lot better lately, but school has reached the "crunch time" point, so I haven't been able to exercise much over the past two weeks. I know - excuses, excuses - but I've been averaging four hours of sleep per night with just work, school, and homework, so I really did not want to give up another hour of sleep for working out. I adjusted my diet instead, and that seems to be doing okay (I lost another couple pounds last week, but I'm still not back to my all-time low).

Once this semester is over (end of this week), I can start swimming again. I've been trying to walk more - because I love it, it adds steps to my Fitbit, and I can beat my friends - but my body is used to walking. I'm sure it still benefits me health-wise, but as for weight loss, it's not enough of a challenge. I need a hilly course, something like that. I started swimming because it's a huge challenge and works my entire body, but again - I simply haven't had time. Swimming takes a lot longer than walking because I have to go to the pool, change, swim, then shower, dry off, change, and come home. Instead of 45-60 minutes, it's more like 90-120 minutes.

I suppose the biggest news is that we've finally, FINALLY made a decision on where to move next year. 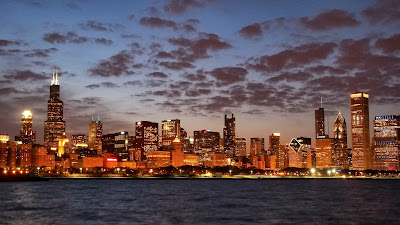 It turned out we knew it in our hearts all along. I was excited about moving to California, but I was also very scared. There were so many logistics. Plus, the SF Bay area is so spread out, and I really wasn't looking forward to driving an hour any time I wanted to do anything. Yes, they have public transit, but it's not nearly as extensive as Chicago. Plus, we can afford to live in the city of Chicago, whereas we would have had to live an hour away from the city of San Francisco.

I hadn't said anything to Brent because he seemed so geeked about getting a job in Silicon Valley. It really would be super easy. As I said, he got three job offers just by touring some places there. I'm sure I would have been happy, and I really was excited for a lot of reasons, but I knew I'd miss Chicago.

It turns out he felt the same way, but he didn't say anything because he thought I was super excited about moving there, and he didn't want to burst that bubble. I felt bad. I'm glad he said something because if we'd moved there and I'd found out about that once we were there, I would have been really sad. I'm so, so happy he spoke up, because as soon as he did, my gut said, "YES," along with my heart. I never ignore my intuition. I know this really is the right decision. :)

I wrote some pros and cons about both areas a little over a year ago, and now that I've been to SF and know the answers to a lot of my questions, Chicago is the clear winner. The job market is better than I thought it was, and we'll be able to afford an apartment in the neighborhoods we like instead of compromising like we'd have to in the Bay area. Also, Chicago is a walking city, which means more weight loss and easy maintenance.

I'm ready to move NOW. I can't believe I have to wait until next summer. Bah! At least that gives us time to keep checking out the job market and save money. My recent promotion will help with that, and I'm thinking about selling my car since I won't need it in the city. (We'll still have Brent's little truck if we want to get a bunch of groceries or whatever.) So, I'm just finishing my classes and whittling away the time until we can start interviewing and packing. :)