Couch to 5K: Week One, Day One 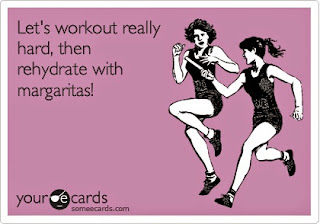 I felt so weird typing that title with full words. Everyone on MFP, SparkPeople, etc. use common abbreviations for the program. From here on out, you'll see me use abbreviations as well. Here's a handy guide:

The track is near an intermediate school and goes around a baseball diamond. It's very small and nothing fancy. I figured it would just be a nice, semi-secluded place to jog since I didn't want to go to the university track with the marathoners and hard-bodies.

When I got there, I saw a few families on the playground, some maintenance men working on scaffolding, and a couple people playing Frisbee with their dogs on the grassy area inside the track.

But, I shrugged, said, "Eff it," and continued my merry way to the track. When the "jog!" cue came on, I started jogging.

And it was hard.

And I was breathing heavy.

And I have NEVER EVER felt so heavy.

But it was FUN! I was able to jog all of the jogging portions, something I worried about before starting. It got harder and harder every time I did it, but I didn't stop to walk. I stuck it out for the full sixty seconds and then thought, "OH THANK GOD," when it told me to walk.

I'm not sure if it's because it was something new, different, and/or challenging, but I rocked it. Oh, I felt like death. Don't get me wrong. I should have brought water (that was an idiot move on my part), and I prayed for a breeze, but it wasn't so bad overall. My left foot kind of hurt and was numb near the end of the walk home, but a few real experienced runners said I probably had my shoes laced too tightly. I didn't realize your feet swelled when you jogged, so lesson learned. I'll keep the left foot a bit looser next time and maybe add a gel pad. My shoes have AH-MAZING support and feel AWESOME when I walk, so I don't think it's the shoes. If the pain doesn't go away, I promise to get it checked out at a shoe store. ;) I can always keep these for walking and use a different shoe for running.

It could also be that I'm not used to using those muscles for impact (walking isn't as impact-y as running), and I did some pretty bogus, half-assed stretches beforehand, so yeah. First time fail. But! It's all part of learning, right? :)

When I got home and took my shoes off, my feet felt fine. I'm really feeling it in my legs today, though, so that's good. It makes me feel like I really did work those muscles last night. C25K has a rest day every other day, and now I see why. The idea is to ease you into running without pain or injury and to give your muscles time to repair so you don't keel over the next time you go out. I'm pleased. We'll see how I do on Day 2. I'm so excited to get out there again. I felt like a rock star when I got home, even though I only jogged for eight minutes alternating with walking.

Okay. I need to stop saying "only". I jogged for eight, one-minute intervals. There. No more qualifiers.

I had every intention of working out my upper body tonight, but then Brent and I got into it about (what else?) money, like we always do when we have a trip coming up. I've been in charge of this trip forever, since I'm in charge of all things that involve planning, and I've told him a THOUSAND TIMES that we have the least expensive hotels; a super huge discount on the rental car thanks to my employee discount; discounts at every attraction between my employee discounts, Mikey's employee discounts, and Groupons; and oh-em-geeeeee just drop it. When I come home from work, the last thing I want to do is listen to someone worry and fret over something I've explained a bazillion gajillion times, and I don't want to solve problems. I need an hour to detox from helping approximately forty people every day. All I do all day is answer questions and fix things, so when I get home, I just want happiness and smiles and some food and my workout before I have to answer a question.

I'm also pissed because I feel like he doesn't trust me, and nothing pisses me off more than second-guessing my intelligence and planning skills.

I felt bad because I got upset, went to my room, and slammed the door shut. (I know. Mature, right?) Then I tried to work out, and I just could not get into it. I was so upset that I hated everything, and I can usually power through, but I was ready to throw the weight at the stupid instructor's head. So I grabbed some water and decided tonight was a bust, which makes me even more pissed off. I can hear him creeping around, so I know he knows I'm still mad. :-P

I bought some hair dye since I'm going grey and not in a flattering way. The hair dye is a foam kind instead of the usual liquid. I really like it. It still smells a bit, but it has this hilariously overwhelming beer and chocolate smell to it in addition to the whatever-it-is-that-makes-it-burn-your-nose. With the windows open and the exhaust fan in the bathroom going, my nose didn't burn as much as usual, and the beer and chocolate smell kind of amused me.

It's just a dark-brown-almost-black color, the same as my hair. My hair tends to get lighter in the summer, so I dye it since my eyebrows are black and don't change. I end up looking really weird if I don't dye it. And now that the grey is showing up more frequently, I suppose I'll have to start having my stylist color it whenever I go in for a cut.

When did I get old? This is so weird.

Since I read so many blogs from runners, it makes sense that I have the bug too. I haven't run since high school, when I ran a mile in gym class every Friday and got my time down to around 11:30 from 14:50. ;) I had NO idea what I was doing, and now that I have tons of information - almost too much information - I think I have a grasp of how to start, what to do, what not to do, and how to get better.

I have to take the first step, though.

I found an awesome app called JogFM (they also have a website). You can put in your desired running pace, and they'll give you hundreds of songs that fit that pace. For example, I chose a 12:00 mile to start, and they gave me over 200 songs at 130 bpm! I'm going to queue the songs up on my iPhone along with my Map My Walk app and my Couch to 5K app. (Reminder: charge my battery before I head out.)

The Couch to 5K app gives you verbal cues to walk and run, depending on the week and day you're on. Today is Week One Day One, so I start with a five-minute warm-up walk, and then I alternate 60 seconds of jogging with 90 seconds of walking for a total of 20 minutes. That doesn't seem so bad. We'll see how I feel later. ;)

The Map My Walk app is to see how far I've actually walked/run. The songs are designed for a 12-minute mile, but they have no idea what kind of stride I'm using. I'm going to jog very slowly and carefully, as opposed to someone who might be running with more confidence (and less weight), not to mention someone with longer legs. The song is simply for pacing, to ensure I don't run too quickly or slowly. I'm interested to see my exact mile pace at the end.

In honor of my new endeavor, I purchased real running shoes: 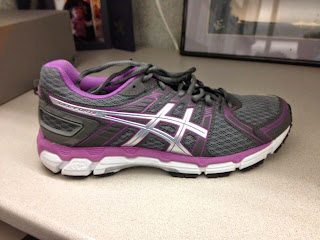 These are Asics Gel-Fortes. I got them on sale for $85 on eBay. I LOVE THEM. They are so, so much better than the Brooks Ariels I had. I sold those on eBay because they were clunky, and the arch hurt my feet so badly I couldn't even walk a half-mile without limping and wincing. These have a slightly lower arch, with a lot of support right where I need it (on the inner part of the arch). They feel like they were molded to my foot. :)

Note: If you're going to try these, go a half-size up. I normally wear an 8.5 in athletic shoes, but I had to buy a size 9. The toebox fits perfectly, but the heel slides a little bit. I'm interested to see if they pull my socks down like the Brooks did. I tried them on during lunch, but I'm wearing flip-flops today and had to test them out barefoot. /crosses fingers for no sock pulling

Unfortunately, I'm not going to be able to keep up with C25K after Friday because we're leaving for

I can't believe it's here already. :) We're heading to Chicago after Brent gets out of work Friday night, and we're spending the night near the airport. We got a sweet deal on a room with a Park & Fly package. $75 for the room and parking, which is cheaper than parking at the airport. Score. I figure this will give us time to deal with a car breakdown or forgetting something or whatever, rather than rushing around and possible missing our flight on Saturday. Plus, we can sleep later on Saturday since we just have to take the shuttle to the airport instead of getting up early to drive to Chicago.

I thought about starting C25K after we get back, but I'm too impatient. I figure I can restart Week One when we get back. That, or I can do it there. Whenever I go to the west coast, I end up completely borked on sleep. I wake up at 6:00 AM and pass out around 10:00 PM because my body is still on Eastern time. So I've been planning, for a while, to get up, work out for a bit, eat some breakfast, and shower before Brent rolls out of bed. Even though he'll be on Eastern time too, his sleep schedule is way different from mine. I figure I'll have three hours before he wakes up, which is plenty of time to jog/walk/swim if I want to. Yay, vacation. :)

I cannot believe I just came up with a fitness plan for our vacation and that I'm actually excited about getting up early to exercise! If you'd told me I'd say this a year ago, I would have looked at you like you had lobsters crawling out of your ears. Hooray for healthy habits, weight loss, and synthetic hormones. ;) I'd say this is a pretty good NSV!